Working with the InMoov tracking service in MRL showed some limits. The movements of the head up and down limits the range view of the robot. Since the cameras I used aren't wide angle lens and if I would add another lens, the tracking would get confused because of distortionned images. That's what I understood from different posts on the forum, so I did'nt buy a wide angle lens to try. Now the option was to build a mechanism for the eyes. In earlier post I had discribed it, but couldn't upload it on Thingiverse because of servo failure which resumed my test to a few minutes of movements.
Since then I was waiting for some other servos, some DS929HV from HobbyKing, which finally arrived. After a few test the mechanism had to be reviewed again. Somehow the eyes would get stuck upwards, the skull had a thickness that had to be modified before it's release.
Now the mechanism seems to fonction properly. It isn't very strong and not really easy to hook up in the head, but since I want to go on with the legs, I will release it, as is. Hopefully some of you will make more performant derivatives on Thingiverse.
The tracking service integrated in InMoov is under work by Grog on MRL at the moment, so I can't really make more test with that. Plus, I have bought two Adafruit 16 chanel boards for to extend the servo number capacities of my  two Arduino.
I did some simple test with the Adafruit boards using the Arduino library and it works. Now Grog needs to add on his working list, the implementation of this two boards in the service... I don't know when he is going to find time for that.
The goal is to create a tracking service which will benefit of four actuators, two for the head movement and two for the eyes. It's like adding a pan/tilt mechanism in another pan/tilt...According to Grog and Alessandruino (A friendly participant of MRL which is of great advise) it is faisible.
Below is a video of the tracking recorded through the camera of InMoov. the video is slow and corrupt because the codec encoder I choosed in MRL OpenCV wasn't the right one. So I can't cut uninteresting parts and also can't speed it up. If you really have time to loose, you will see the InMoov's hand showing the teddy bear to the tracking, after that I give voice commands (which aren't recorded), the tracking head moves accordingly to the tracking set point. When the hand reaches the bottom of the screen, this is the limit of the head  movement. I did try a few times with the same voice commands "one", "two", etc like seen in previous videos without succes. Of course I could modify the gestures to stay in the view range of the tracking but it is too limited. Now adding the movements of the eyes to this, hopefully I will gain in view range.

Again nothing much happens in this video, so if you really have time to loose, go ahead


Okay you will find the eye mechanism Here.
I have done pictures of the assembly and need to make the tuto. The connections to the Adafruit board still needs to be done, so no details about that.

Concerning the ears. I haven't solved the noise problem coming from the servos interfering with voice command, so instead of loosing time on that, I got myself a Bluetooth head set with microphone which let me give the commands pretty safely. This is what I got: Logiteck 981-000382 Wireless Headset..
So at the moment the ears are just for the look, I will upload them as well. If you find a way to use microphone in there, please let us know on the forum.

The foot and ankle still needs improvements, but all together the principle of double contrary rotational system that I imagined seems to work. The ankle can take any human positions at rather fast speed. How to control it, so it adapts itself to an uneven floor still remains a question though... I need to reinforce someparts because they wouldn't last long with the full robot standing on them.
I designed the foot with a look halfway between a foot and a shoe. The big toe doesn't look anymore like on these photos, it is now, more integrated to the other toes. Also the toes fold more to a 45 degree angle now.
Here are some pics. 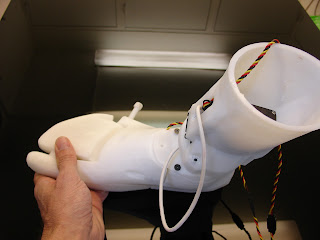 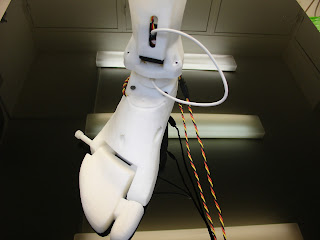 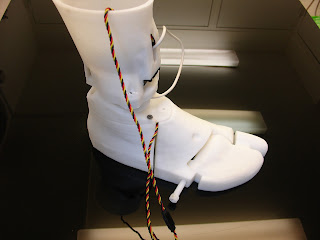 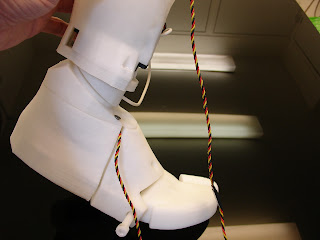 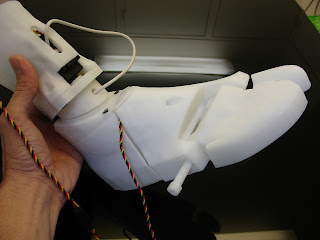 Beside the foot which needs to be improved, that meens somehow redesigning  some parts, I decided to make myself happy and to enhance the look of InMoov.
The Torso was initially designed to receive a shell for to create a chest and a back. I only worked on the chest for now and reserved a space for to insert the kinect Xbox360. The space reserved should allow other users to insert other brands of Kinect. On the pictures below it doesn't show how it is inserted because it will come right under the printed chest. I still need to print those parts to make sure it all fits together.
Of course I couldn't resist to put the InMoov logo on his chest... These new parts gives him a pretty sturdy figure, I'm happy with the look. That's where my sculptor feelings are the best exhorted. 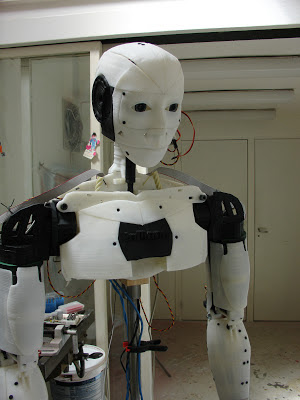 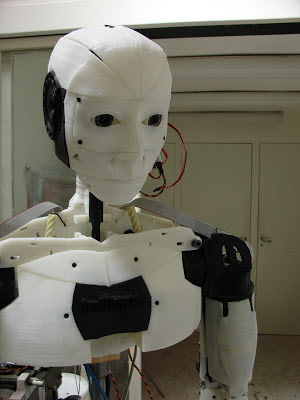 And this is what I think is pretty cool at the moment. Playing with InMoov seems slow but when I see how difficult programming is, I think they did a fantastic job. Their goal is to present it at the MakerFaire in Taiwan.
Paper Scissor video: