I was away for a while, and of course when I travel, I don't cary my 3D printer with me. Plus, being away in the desert makes it difficult to comuunicate with internet.
Since I released the finger prosthetic for Bionico, I was impatient to print it.
Fortunatly Morris, on the other side of the Atlantic had his printer ready for testing. He was the first one to print the finger and got me some feedback.
You can see his blog here
So I was designing on my computer in the desert and he was printing the parts along, and everytime some thing was not correct in my design, he would notify me and I could check the pictures posted on his blog to modify the design in consequences. This took us a lot of time after all. But we got to move on and thanks a lot to him. The three bellow pictures are from his blog: 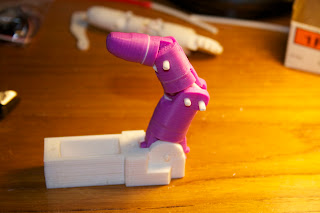 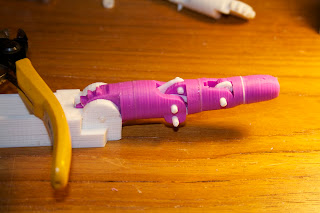 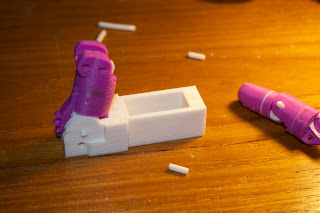 Being back from the desert, I was then able to print the finger. There was still things that were not correct. I also ordered another type of motor which is a 6V planetary gear motor with a ration of 154:1 from Pololu.
So the casing had to be redesigned again. There is a very small worm gear that actuate the finger and I printed it in ABS but it is definitly too fragile, so it either needs to be modified or printed in stainless steel. You can get it by Shapeways here.

The planetary motor:
http://www.pololu.com/catalog/product/1109
The dual driver DRV8833
http://www.pololu.com/catalog/product/2130
The Arduino card:
http://learn.adafruit.com/arduino-tips-tricks-and-techniques/arduino-uno-faq
Here is a video of the finger in action. The speed isn't really great, but it is a choice of planetary ratio I made for to get higher torque.
It was pretty hard to make that video, because the small wormgear breaks when the finger reach the end of it's run. Unfortunatly I haven't yet figured out how to set a time delay on my script and a reverse of polarity. Using DC motors and servos is not the same when it comes to create a script in the Arduino.


InMoov is selected and invited for the European Makerfaire Edition in Roma. So I will be going to Italy and have the pleasure to meet all the italian and european geeks that attend this event. I hope to get some time to make the robot usable, it's going to be something to put the full InMoov in a suitcase.
Myrobotlab is also selected to attend the Makerfaire, Alessandro will be the Ambassador of MRL. Leonardo who has created a superheroe InMoov will attend the faire as well, hopefully his suitcase is big enough for to bring his robot. Leonardo his also working to make us a real website.

And Bionico, of course, is also selected for the Makerfaire, we are currently getting a hand ready for Nicolas. Hugues is hard at work on all the stage levels.
Here is a french article about us in LE MONDE newspaper.